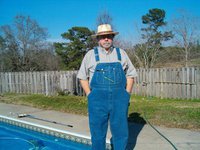 This anecdote was posted as part of a casual thread on Facebook.

It all began with Pastor Bud Powell posting the following Scripture verse:

“But if our gospel be hid, it is hid to them that are lost: In whom the god of this world hath blinded the minds of them which believe not, lest the light of the glorious gospel of Christ, who is the image of God, should shine unto them.” (2 Cor 4:3-4)

Mr. Tim Naab replied with this true story, which is such a beautiful illustration of spiritual blindness, and being awakened, or made alive in Christ through regeneration. It is reproduced here with the generous permission of Mr. Naab.

Many years ago, when I was about 30 years old, I worked as a residential electrician. I was sent to the home of a man a bit older than I was. He was born totally blind. I had never been around a blind person before and felt a bit awkward. I was determined not mention his blindness and try to avoid it.

I soon realized that it cannot be ignored nor avoided, and in fact, should not be.

He would leave his home and walk downtown by himself. I was amazed that he could navigate such a large city and return home unharmed.

I noticed that in front of his home was a large maple tree growing between the sidewalk and the street. A large root had grown under the sidewalk and had raised one side up about 10 inches. He would navigate to this point then step up and walk across this portion with ease.

I had to climb in the attic over his bedroom to run some wiring to a new breaker box mounted behind his bedroom door. After I climbed out of the attic I entered his bedroom and he was sitting in a chair reading brail with his fingers. I stood and watched him for a while and found it fascinating. I turned my back to him to work on the breaker box and he said, “I heard you up on the roof.” I told him that I had been in the attic. He said that he had never been in an attic or on a roof and asked me what the roof was like.

I thought for a moment and said, “Do you know that area on the sidewalk that is tilted toward the street?”

I told him that the roof is the same way in order to shed water when it rains and the snow melts.

Impressed with myself for explaining the roof, I turned back around saying, “and it is black.”

I should have stopped with the sidewalk definition.

He chuckled and I realized I had said something he didn’t understand. He said, “I don’t know what black is.”

I decided to impress myself again by making him understand what black is so I said, “Black is like darkness, like what you see.”

I said, “Sure you do, what you see is darkness.”

Again he replied, “No, I don’t see anything.”

I realized that I had not succeeded in avoiding his blindness. So I told him the roof was rough like course sand paper, which he readily understood. Then I quickly changed the topic.

I thought about this for a long time afterwards and over time the implications of this was mind-boggling. I had a chance to spend a few days with this man and learned many things about his world.

I came to understand that he never condemned himself for lack of sight because he did not know what it was. The only way for this man to comprehend darkness was to comprehend light.

Many years later God saved me and I begin to read scripture.

John said, “And the light shineth in darkness; and the darkness comprehended it not. (John 1:5)” Then he said in John 1:9 “That was the true Light, which lighteth every man that cometh into the world.”

How is it that He lighteth everyman, yet the darkness did not comprehend it?

When a man is born physically blind, he cannot know light even though he stands in it daily. He can however, be warmed by the sun, eat of the bounty of the sun, have a comfortable life because of the electrical energy it provides but he can never understand light.

Paul said, Eph 5:8 “for at one time you were darkness, but now you are light in the Lord. Walk as children of light.”

Notice Paul did not say you were once sitting in darkness, he said you were darkness. Unless we see the light we cannot know darkness.

When God regenerates a man, two things will happen, he will know God and he will know himself. He will see light and know that he was once darkness.

The Gospel being proclaimed in most churches today fails because it is attempting to “share” a sunrise with a blind man. It is offering an answer to men who do not know the question. It is doing as I did trying to be self-impressive by defining darkness to a blind man.

A couple of additional thoughts added later by Mr. Naab:

For all my gesturing, passion and descriptions of light, the result was still his INABILITY to comprehend light. Suppose after all of this we were standing on the beach at sunrise, and just as the sun came up GOD instantly healed his blindness. He would have instantaneously comprehended light, for two reasons: 1) because he could see it and 2) because it had been described to him.

This is how we proclaim the Gospel. We describe it but can not cause man to comprehend it, but when God regenerates a man, he instanly receives it. We are justified by Faith and FAITH comes by hearing (to comprehend).